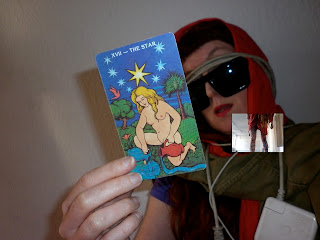 
Description: Born out of a workshop with Vincent Riebeek in NZ in 2012 and prior work 'The Star' explores satirical and embodied notions using 'psychomagic' (Jodorowsky) of the tarot card of the Star (pulled in the workshop), interweaving a response to today's problematic relationship of humans to the environment and our 'needs' to be a 'Star' within a warped media culture, which overlooks a greater respect slightly more pressing concern.

Jodorowksy's film Holy Mountain (1973) happens to be my favourite film of all time. This premise explores the notion that all action is tied to a special realm in which healing can occur through seemingly unrelated but interconnected incidences, images, symbolisms, words and experiences inacted through art and life as a foldback loop, albeit through performance acts.

I had already been exploring the use of tarot in general, but this workshop and work helped clarify my ideas around how to integrate tarot into my already 10 year developed practice of conceptual performance art and dance making. The card I pulled in the workshop with Vincent was my favourite tarot card, The Star. This card imbues and evokes hope, optimism, inspiration, enlightenment, magic, healing, beauty and evolution. Because my work is often dark in subject matter and highly interdisciplinary the outcome of the small work is a concentrated integration of what this card can bring to my vision of the world today, which is an intense, chaotic, confronting, satirical, absurd, politically pointed and deeply subversive/playful vision of what 'The Star' can mean using performance art, voice, 'technology', sound. 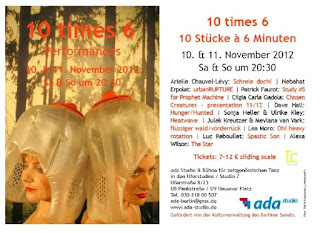 I know! thanks for kick starting a new direction/inspiration vincent :) xx was such great synchronicity..