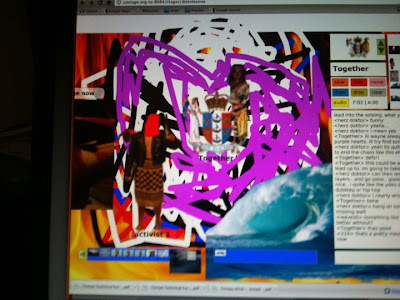 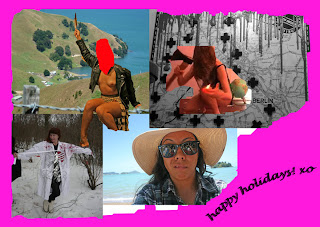 We are creating a dance video/collaborative cyber performance between NZ and Berlin which interculturally and symbolically muses on the notion of 'Die Totezone' 'The Deadzone'/'Deathstrip' in Berlin/Germany)- a space between the 2 former Berlin walls (1 on the west- the main wall- and one on the east) where many people were killed trying to cross it for 30 years. We are linking this conceptually with NZ's political and physical space between the high and low tide of the beaches known as the 'Queen's Chain'- which became part of a hot topic for Maori people a few years ago as 'foreshore and seabed' claims were debated by them with the government and protested in a national Hikoi/march.

We are collaborating on a cyber performance via the upstage platform between Alexa Wilson in Berlin exploring urban social spaces (ie between the 2 former German walls) which question, call to, express, satirise and honour aspects of these tensions- be they german social spaces framing dislocated 'NZ' identity and Maori performance artist Cat Ruka- exploring the 'Queen's Chain' on or around beaches in NZ and being both in literal dialogue regarding notions of 'representation' of cultural identity itself.

We are interested in healing 'warlike' liminal social/political spaces as well as using them metaphorically to ideologically heal 'warlike' ways of thinking between cultures.
Posted by Alexa Wilson at 1:51 AM